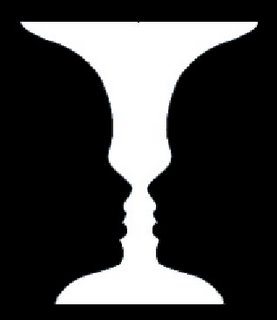 When I diagram a lunar cycle I tend to draw a circle and place the new moon at the bottom, the full moon at the top, the first quarter on the right, and the last quarter on the left. This habit was formed before I had any experience with astrology and I have no memory of where it came from, though I assume it was from some general science book in school. I have seen these phases drawn using any of the four cardinal points as the conjunction point. Just as there seems to be no universal method for numbering the 360 degrees of circle, there is no universal method of diagramming a cycle. My brother always places the conjunction point at the top of the circle and forty years ago we would argue which way was more correct. I don’t believe either one of us thought that one way was actually more correct than the other, but it was a point that made a difference to us. Actually, the difference may have been in our charts: all of his planets are in the west and all of my planets are in the east, so we were moving in different directions.

His primary argument was that the natural alignment between the zodiac and the houses, when zero Aries is on the ascendant, places Capricorn on the tenth cusp and Cancer on the fourth. Since Capricorn was the seed point of the year and Cancer was full bloom, it would make sense that the full moon is aligned with Cancer. I didn’t quarrel with that, it may be the reason the moon was said to rule Cancer, but some thought has to be given the fact that the seasons are reversed in the southern hemisphere. This was always an awkward thought for me, it didn’t interfere with me recognizing how well the zodiac worked, but I didn’t like to think is was based on a northerner’s bias. Another thought that puzzled me was the correspondence of the signs with the houses. My brother appeared content with the thought that the fourth house was the full moon position for the day, that the individual was the harvest, but that wasn’t how I saw it. For me, the equivalent of summertime in a day was noon.

As the zodiac charts the sun’s apparent journey through the year, I saw the houses as charting the sun’s apparent journey through the day. It began at midnight, when the self was hidden, it began to show some light at dawn, and it reached its peak at noon, when the self is revealed. For me, it was a diagram of my inner feelings, dreams, and thoughts and my struggle to make them real, to express them so that others can see them and, just as importantly, so that I can see them. I wasn’t creating a self, I was uncovering one.

But, looking at it this way, it meant that the full moon point of the zodiac was aligned with the new moon point of the houses, and vice versa. The reason of course was that that is the way it was in the skies. I could live with the fact that the houses were all numbered in the reverse order to the sun’s, or any planet’s, daily circuit around the earth, because that’s the way the signs were and, if you wanted to be technical, that’s the direction the earth was turning. But it still appeared, if only to me, that the polarity of the signs and houses were reversed.

On the earth, magnetic polarity is roughly aligned with geographic polarity so there’s some justification for thinking of them together as though they were the same problem. Geographical polarity provides it’s own problems, particularly with mathematics on a sphere, but I was concerned mainly with the axis, like a bar magnet with a pole on each end, and I was considering the number two.

As a child I was fascinated with optical illusions like the Rubin’s vase, which looked like a simple black and white illustration of a vase until suddenly it changed and became two faces in profile. I was fascinated and a little frustrated, since it seemed like it should be one or the other. It was the same frustration I had when I learned that in an electrical circuit the electrons are actually moving away from the positive pole and not towards it. I thought I had been told differently and it took some rereading to understand that the current was moving towards the positive pole. The current was the attraction, the space left by an electron that always moved to the positive pole. Again, I understood this as simply semantics, and I felt that as soon as they discovered that the electrons were going the other way they should have renamed the poles on a battery. It took me awhile to appreciate that it was this attraction that contained the potential, and it was as real, if not more real, than the electrons.

Often when thinking of a circuit or cycle I get so hypnotized by the image of a circle, that I lose the concept that that there is only one object, and it is simply changing states, cycling through its changes, and the changes are only perceptions. Like an optical illusion, it suddenly reverses on you and you find yourself looking at its opposite. But the picture never changes; at times you can see both images at the same time and then you are actually seeing the whole.

This entry was posted on Thursday, January 15th, 2009 at 5:01 am and is filed under Uncategorized. You can follow any responses to this entry through the RSS 2.0 feed. You can leave a response, or trackback from your own site.

One Response to Polar Opposites